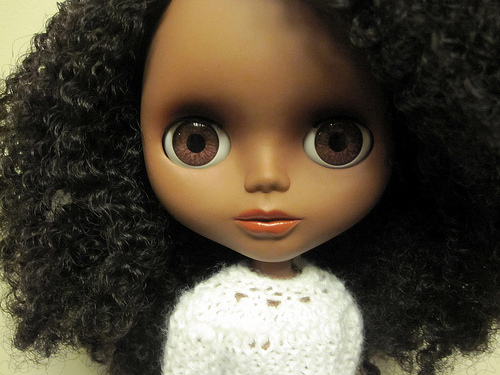 After reading Kelli Goff’s article, “Why it matters that Angelina Jolie’s white child plays with a black doll“, I thought about how I’ve gladly bought black dolls for the black girls in my life but not for the white children I know. As difficult as it is to admit, I think I was afraid to deal with the reaction to the dolls. Anything less than a gracious appreciation would probably have irrevocably affected the relationship I have with my white friends. I guess the article made me realize that while buying a black doll for a black girl is about empowerment and affirmation, buying one for a white child is a political act.

It’s shouldn’t be a surprise, however, because black dolls have been politicized from the start.  The first black dolls, the “mammy” and “pickaninny” dolls,  were used to dehumanize black people and to no doubt create an image of black people that would justify the violence against them. To push back against the overwhelmingly racist caricatures of black children, a white woman, Sara Lee Creech, created, Sara Lee, the first non-racist, “anthropologically correct” black doll.  In the original press release for the Sara Lee doll, explained why Ms. Creech felt her dolls needed to be made:

1. Miss Creech felt it was high time that Negro children at play had available to them a fine doll they could love and admire which would give them a new respect for their own heritage.

2. She felt it equally important that White children in their play had a fine doll available to them which would bring them a respect for the Negro.

What Ms. Creech did in creating dolls for black children was beyond commendable because Kenneth and Mamie Clark’s now famous “doll test“,  demonstrated what happens to black children psychologically when they are not surrounded with positive black images. According to the Clarks’, our children learn to make a negative association with their blackness which manifests itself in black children rejecting black dolls because the dolls look “bad”. It’s rather unfortunate that the results of the doll test has not changed much since Brown v. Board of Ed. Black children still prefer to play with white dolls and white children prefer to play with dolls that are either white or lighter skinned.

We live in a culture that values white people and their experiences highest of all, and investing in diversifying their first interactions with media and toys can go a long way to teaching them that the world is filled with all sorts of people.

At this point it should be a no-brainer that we should buy black dolls for black children but it’s just not the case when it comes to buying black dolls for white children and that is sad because the research shows that giving black dolls to white children would go a long way in reducing prejudice and racism in our society. When all children play with black dolls, it sends the message that the person the doll represents is valued. Ideally, however, the doll should be a part of a discussion about respecting diversity.

The takeaway, for me at least, is that buying black dolls is that serious. So after careful consideration, from this holiday on, I plan to buy black dolls for the white children in my life and I urge you to do the same. If you disagree, please feel free to let me know in the comments.

One thought on “White girls (and parents) need black dolls too”