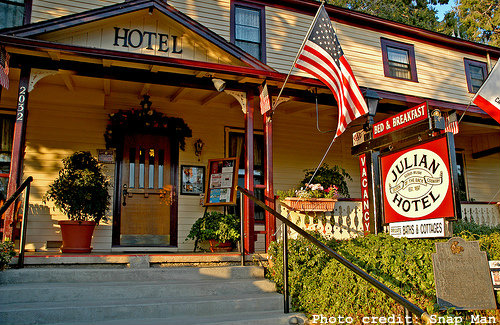 I was inspired to  write this post after reading the first article in the fascinating series, “Unsung Black Women in History“, on Clutch Magazine. I wrote in the comments that it’s important that our kids understand that black history is filled with every day heroines and heroes who not only persevered but triumphed despite the burden of being black during slavery and  post-Emancipation.

Albert and Margaret Robinson were two such heroes. I swear that reading about the Robinsons will make you sit up a little taller. They were both former slaves who had separately moved to California where they met and later got married. Albert and Margaret were living in Julian after another black man, Frederick Coleman, had found gold in a creek near the town which started a gold rush in the tiny town.

Another pioneer, Albert Robinson, originally came to California as a slave. Robinson won his freedom and moved to Julian around 1880. With his wife Margret, he opened the Robinson Restaurant and Bakery. Margret’s reputation for good cooking and hospitality brought in so many customers that Albert soon added rooms to the restaurant. The new Robinson Hotel became very popular during the Julian boom times and beyond. The Robinson’s owned and operated the hotel for 28 years. The Robinson Hotel, (presently known as the Julian Gold Rush Hotel ) has been in operation for over a hundred years and is the “oldest continuously operated hotel in southern California” according to the National Register of Historic Places . More here…..

The Hotel Robinson was a success and amazingly had even the notables of the day staying in a black-owned hotel:

Fitting beautifully into the new Victorian society, the Hotel’s register confirms it was a frequent stopping place of Lady Bronston, the Scripps, and the Whitneys. The register even boasts the presence of many a senator and congressman.

The hotel also acted as a social hub:

Popular also with the townsfolk, the Hotel, located opposite of the town hall and stage station, became a social center in Julian which at that time boasted of two stage lines to San Diego, a toll road connecting Julian to the Butterfield Stage Route, six hotels, four general stores, and a dozen or more saloons. The Julian Inn was especially a hub-bub of activity after the monthly town hall dance when Margaret Robinson would prepare a midnight feast that was anticipated with great excitement.

The Robinson’s legacy continues to this day. I visited the hotel a few years ago and it is pretty amazing to be able to stand in a hotel that people who look like me built over 100 years ago.